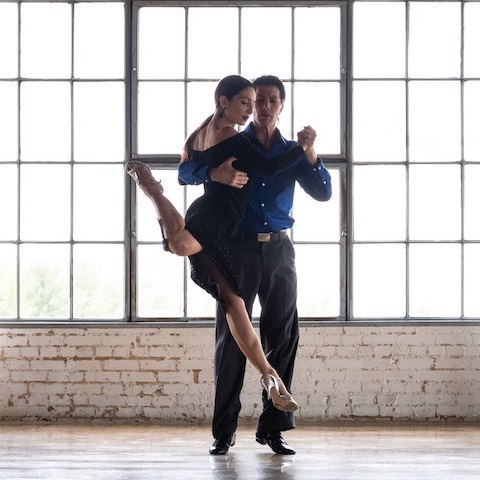 George and Jairelbhi Furlong:
Born to an Argentinean family, Tango was a presence in George’s life since his early childhood. Thanks to a highly musical family, he started his musical training at age 10 and continued through high school and college. A native of Caracas, Venezuela, Jairelbhi began her dance training at age 9, joining Las Voces Blancas, one of the top dance schools for children in the country. Because of her graceful movements and perseverance, she became part of the school’s dance troupe, making television performances and traveling frequently.

Recognized for their musicality, George and Jairelbhi Furlong have performed and taught in cities throughout the United States,Canada, Mexico, Central America, China, and Russia, as well as in Buenos Aires (Argentina), and are seen as one of the most promising Argentine tango couple of their generation. They have performed with the Fort Worth Symphony, Dallas Symphony, San Francisco Symphony, Lisandro Adrover’s Quinteto,Opus Cuatro, and with bandeonists Horacio Romo and Daniel Binelli. They toured the USA in 2007 as part of the cast of ‘Tango Buenos’, and Mexico in 2008 with the Hugo Patyn Dance Company.

From 2011-2016, they were part of the cast of “This is Tango Now” created by Fernanda Ghi and Guillermo Merlo. They traveled throughtout the USA and toured China with Fernanda and Guillermo’s “Identidad” and “Carmen de Buenos Aires.” They also have performed in shows such as “Maria de Buenos Aires” with San Antonio Opera. Often invited to be part of the most renowned Tango festivals in the United States, George and Jairelbhi created ‘Evolutiontango’ in 2005, a dance group based in Dallas, Texas, and have produced, directed, and choreographed ‘Tango: Now and Then,’ ‘EvolutionTango,’ and ‘Shades of Tango’ among several other shows.